No Doors In A Jail – Hidden Spot in Cuba

Can you imagine jail without doors?

There is actually one named “Presidio Modelo” in a Cuban island.

It is located in Isla de la Juventud (meaning island of the youth in English). One of the most famous Cubans, Fidel Castro, spent few years with his brother there (FYI; the world famous revolutionary hero Che Guevara from Argentina).

If you are interested in visiting Isla de la Juventud in Cuba, I would like to write about how to access, what to see, where to eat etc on the other article.

This jail is now abandoned but still you can enter there.

This jail structure is called “Panopticon” which means that all prisoners can be observed from the central post.

It therefore worked in their mind as if prisoners were always being observed not only by prison officers but also by other prisoners themselves. Although there are no doors for each cell, prisoners would stay inside regularly until it got overcrowded.

When I got there, I was so astonished by its atmosphere because I never felt in any other place that I’ve been to.

I can’t describe how it was exactly but I kind of sensed the history of the people who lived for the revolution. I don’t remember how long but I was just staring the center post and lost in thought for a while.

The building itself is much bigger than I expected but rooms are much smaller. Now it is no longer in operation as a jail but a museum.

I was not sure how to go up to the central observation post, I couldn’t find the entrance, but I guess there is a tunnel underneath, though.

You can walk on the rooftop. 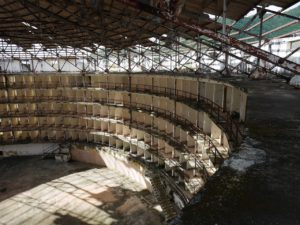 In the other circular building (totally 5 buildings), there is an assembly hall which looks like church or mess room. 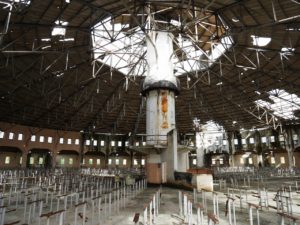 Since it has not been used for years, there are lot of beehives. 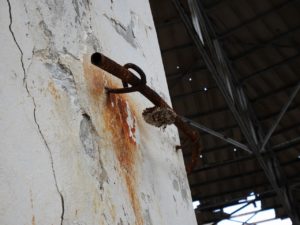 Presidio Modelo is accessible by bicycle from Nueva Gerona. If you ever visit Isla de la Juventud, you must go there.