Bali is probably best known for its resorts and beautiful beaches, especially by Australians.

Compared to the rest of resorts in the world, Bali would be one of the most reasonable places price-wise.

The combination of traditional temples and beautiful beaches is not seen in many places in the world apart from Bali.

There is an unique taste in the landscapes which you must see before you die.

This article talks about one of the Balinese cultures, Kecak Dance, and its tips you should know.

You can watch it at Tanah Lot which is one of the most famous temples in Bali.

If you would like to watch Kecak, it’s the best you first see Tanah Lot and then go to watch it.

One thing that you need to keep in mind is that it’s a first come first served basis for seats. If you want to get centered seats, you better go ahead early. 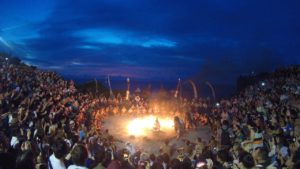 As you can see, they perform with fire as well, not only singing and dancing.

This scene would be showing the sacrifice or something like ceremonial.

This photo, I took also to prove that there is a huge audience filming exactly as I did. It looks like the audience is joining the singers.

There are several types of Kecak theme and representations are held at several places, hence, you would hear the sound of music when you walk on the street in the evening.

Price for entrance and dance

Although Tanah lot is far from the city, Uber and Grab are NOT available to / from Tanah lot.

You must use official taxi or a rental motorbike. I took a taxi but considering the price I regretted it.

Rental motorbikes normally cost Rp. 50,000 per 24 hours are much more reasonable than taxi.

Parking fee for motorbikes at Tanah lot is only Rp. 2000.

Also Bali is a religiously unique island in Indonesia. Most of local people practice “Balinese Hinduism”.

If you stay at local hostels or homestay, you would probably see them practice at breakfast.

In the morning, they serve sets of flowers with sticks of incense which are called “Canang” [pronounced Chanan] and spray a bit of water using petals of flower on the street.

It is not enough to win a war; it is more important to organize the peace.  – Aristotle

I would love to write about their life, food and culture in other articles, so stay tuned !