Have you ever thought someone comes to hunt for you?

You may not believe but it can happen to Albino African kids in Tanzania.

This article is written about shocking reality of albinos in Africa, which may contain disturbing contents for you.

Albinism is a hereditary disorder, which is lack of melanin in a skin, eyes and hair. Therefore, albinos look white and are very sensitive to sunlight. It is not only for human but also animals.

There are also albino tigers as albinos of white people. White tigers have stripes on their fur (second left) but albino tigers don’t (left). 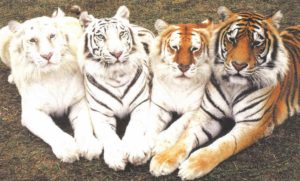 Why do they hunt albinos?

That’s because they need their body or parts of it.

There are still some people who believe a black magic or superstition as some locals go to a witch doctor instead of modern hospital.

According to what I heard from locals and saw the news, it’s mainly happening in eastern Africa, not only in Tanzania.

I met a mother of an albino boy in Tanzania saying that she needed to hide her boy when he was very young.

Depending on the region, they think the younger albinos has the purer split. Hence, albino babies have more opportunity of being hunted.

Some parents even kill albino babies on purpose because they are afraid of  bullies or hunting which might happen to their children in the future.

Unfortunately, while I lived in Zambia a dead body of girl without the heart was found in a village.

Locals believed a rumor that it was sponsored by Indian guy.

Rumor goes much faster than official report by police. So locals struck and wrecked many shops owned by Indians in that village.

Once people get angry and work together, police force doesn’t work, otherwise police officers would be the next target of angry locals. Besides, officers also one of local people who are in grief due to neighbor’s  death.

I found articles about it on BBC and CNN. That’s exactly what I heard in Tanzania.

Tanzania has a dark relationship with albinism. Witch doctors hunt those suffering from the condition for their body parts, which are used in potions to bring good luck and wealth. Victims can be kidnapped and then dismembered by hired killers, or even sold by unscrupulous family members, with body parts fetching up to $75,000 (£60,000). The UN estimates around 80 people with albinism in Tanzania have been murdered since 2000. – Source : BBC

How can it be solved?

They normally can’t afford to the cost for moving and starting new life in other countries. Also they love their home country of course.

It’s not easy to tell them to leave the place. Even if they moved but still in the same country, there is also possibility of hunting there.

Hunting is basically proceeded by non-educated people who don’t go to school. It means that even if the government executes an education about albinism at school, those who believe black magic would not listen to it.

I think if they can believe in something like a religion (technically magic is not religion though), they might be able to believe in real religions which tell human to be respectful each other.

If it ever worked, hunting for albinos would disappear. At least I would like to wish so.