2. Possibility of the Universe

I wanted to confirm with African Karate Boy N if he had endured offensive language.

“You were harassed by someone, weren’t you?”

He was not discriminated against. But still, I wondered why he was bothered by the color of skin.

“Then why are you saying like that?” I asked.

Regardless of the fact that he has never been abroad and did not have many opportunities to mingle with other races, the teen boy already had a cockeyed view.

Even though over 50 years had passed after independence from the UK, the way of thinking that locals had in colonial times still remained there. 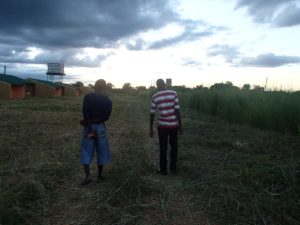 I thought I should give a small talk about what I think about Karate Boys.

“No matter what brats like you whine, you are the universe, after all.” I said.

“Are we the universe?”

Karate Boy N replied to me, as he could not believe what he heard.

“Don’t make me repeat this kind of stuff” I told him.

I had made an effort not to like them. Otherwise, I wouldn’t be able to be strict with them at Karate practice.

I kept avoiding expressing my good feelings towards them. Once you say it, it dwells in a soul. That’s what I was afraid of.

“Then, go back to the past and see the present.”

“Sensei, I am more confused!”

“Because you guys are still sandy brats, like Pig Pen.”

My smooth roundhouse kick, like the wind blowing out a candle, glanced his nose. In that moment, I honestly thought he became stronger.

The roots of education are bitter, but the fruit is sweet.

At the very beginning, when he started Karate, he even couldn’t understand why he almost lost consciousness.

But after a while, he was able to dodge my unpredictable kicks by just bending himself backwards.

There are no enemies warning you before attacks.

Even lions, the king of beasts, ambush, and aim at weak points. Surprise attacks are just natural in the living world.

Therefore, I made them realize that while they are with me, the training is always on.

I continued, “In short, the universe is not too small to let bloody brats like you be pessimistic.”

After quietly contemplating this he said, “I don’t understand.”

Even now, some of my friends point out my tendency to speak very few words. However, there are people who strangely understand all of my words.

There are several ways to address them. Such as soulmates, copemates, brothers, etc., though, I see them as non-blood-related siblings.

In other words, they are my sworn brothers.

It would be good if I talked to my sworn brothers a few times a year.

Even when I meet up with some of them for the first time in years, our conversation begins as if we were just talking few minutes before.

We never talk about our next meeting.

As cherry blossoms certainly bloom in spring, we meet up when the time comes.

Even if it’s the next life, the bonds of swore brothers will never fade. True friendship is not qualified by a number of words.

I just wanna say thank you to all people who keep

After hard working, it reminded me that I am reall

Because all the Parisians uploading the first snow